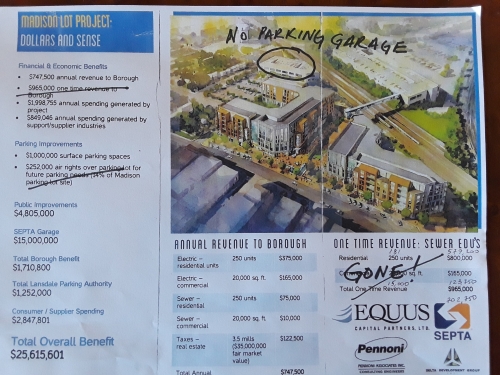 I had been asked to attend the ribbon cutting of the Madison Parking Lot Project, but politely declined. Having been critical of this project in the past, I felt it would be hypocritical to stand there and sing its praises. Whether or not this project is the catalyst that sends Lansdale’s revitalization into the stratosphere is anyone’s guess. Yes, an additional 350 or so people living in 181 apartments in the center of town will be helpful to the downtown businesses. But will there also be challenges with parking? Probably. So admittedly, when I debate back and forth with proponents regarding these issues, at some point, there is a stalemate. In other words, we won’t know the project’s impact on the Borough until it’s completed. I hope that the project is successful and Lansdale benefits.

With that said, the issue I have standing shoulder to shoulder with my colleagues singing Equus’ praises is that there was so much promised by Equus which has now been taken away. Here is a list of the following things that the tax payer will now have to foot the bill for:

Now, the tax payer is now on the hook for an estimated $1,082,750. And we turned over the property for $1 without getting the most expensive piece of the original deal: the parking garage. THE PARKING GARAGE WAS THE PRICE (ESTIMATED AT $25 MILLION) FOR TURNING OVER SEVEN ACRES OF LANSDALE PROPERTY TO EQUUS. However, in the six years that have passed, this project has gone through several incarnations mostly to the benefit of the developer– no parking garage (SEPTA did that on their dime), no one-time sewer EDU’s, no skateboard park and while small in terms of dollar amount, no improvements to Railroad Plaza– which is still missing its pergolas! Equus is a large, billion dollar company. How does one defend this ‘bait and switch’?

At this time, some may say this is just sour grapes after losing the election, but for anyone who has read this blog they know that I don’t shy away from controversy. My purpose in writing this blog is to help inform the resident about what transpires in government. The deal is done. Simply put, Equus wore Lansdale down over time; they met the requirements of the request for proposals when they pitched their attractive, initial product. Unfortunately, their original plan was reduced in size and scope while not offering anything to Lansdale in return.  Again, I hope the project is a success, but in the meantime, the residents of Lansdale are on the hook for paying what they nixed. By the way, did anyone hear taxes are going up?

This entry was posted in Uncategorized. Bookmark the permalink.

One response to “The Madison Parking Lot Project, Part III”