Part of the purpose of this blog is to record for my children a description of what Lansdale was like in 2012 and 2013. Christmas memories– at least those people that I have spoken to– usually begin between the ages of four and six years of age and are particularly acute and remembered well into old age. At that age, I remember watching the Mardi Gras Parade from the front porch of 608 West Main Street (this house was owned by Alberta Allebach who rented her front two rooms to my father for his chiropractic practice in the early sixties). I remember the smell of polished, hardwood floors, a baby grand piano and running out to hand Santa my Christmas list. My daughter, Anna, just turned five this past November, so I can only imagine what her memories will be of this Christmas in Lansdale. Two particular memories for her– and me– will be Gene Rose’s house decorated with Christmas lights and the Bergey family singing Christmas Carols door to door in the neighborhood.

Gene Rose lives on Perkiomen Avenue and for the past four years his house has been a destination for residents and non-residents alike. Gene is a machinist by trade who was inspired to decorate his home after a trip through Princeton, New Jersey at Christmas time. What started out as a few strings of lights has developed into 26,000 lights synchronized to music– available at 90.7FM– with different Christmas songs relayed to multiple transformer boxes and then out to stars on the roof, snow flakes in the yard and strips on the shrubs. He starts setting up the lights in mid October with an anticipated finish date around mid to late November (he had back surgery last year and didn’t put the lights up). Once finished, people drive from all around the North Penn region to park for a few minutes in front of his house to watch the display. “Any motor vehicle accidents out front due to gawkers?” I asked. “No”, he replied, but a few close calls he added (including this author). “Do any of the neighbors complain to him or the local authorities about the increase in traffic on Perkiomen Avenue?” I questioned. Smiling he answered, “Not a one.” In fact, while talking to Gene, he happened to be opening his mail and he showed me the very opposite: a letter thanking him for putting up his display. “Our children love the light display!” wrote the neighbor. With a twinkle in his eye he told me that putting up those 26,000 lights is a labor of love. And nowadays with LED lights– he justified his light display– his electric bill only goes up an extra hundred dollars a month! 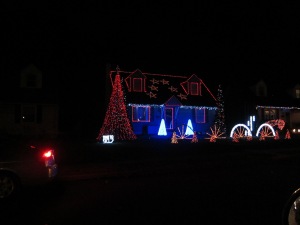 Each year on Christmas Eve, the Bergey family and members of the Lansdale Mennonite Church come to our house to sing Christmas Carols. They range in age from eight to eighty. No proselytizing, just singing. There is something nostalgic in this scene, something from a simpler time. Last night, they came as usual and sang a few songs, and Anna sang with them this year. We thanked them, and they continued on their way. It was a good hour or so after they left that the house finally became quiet. It was then that a faint singing could be heard from inside the house of carolers down the street (almost like the singing beginning to grow in Dr. Seuss’ The Grinch), and I thought to myself that this could have been a scene from Lansdale fifty or sixty or seventy years ago. 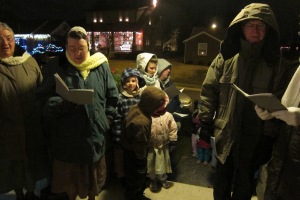 I can only imagine what Anna will remember about Lansdale when she is my age and what Lansdale might be like 38 years from now. Merry Christmas!