Kiosks, Signs and Such

Last Monday night was the way-finding presentation in Lansdale. The consultants presented the various ways to inform the public about where to park, where White’s Road Park is, where Borough Hall is, etc. Not very exciting stuff as evidenced by the reaction from the Public, and I’ll have to admit that my mind was also wondering during this presentation until our presenter mentioned kiosks.  We could have the kiosks– they’re innocuous enough– but we could also add a few historical markers that would show residents and visitors alike that we are a bit off-center and fun-loving. How about a marker near the train tracks on Main Street that peaks the interest of visitor and resident alike by describing an interesting occurrence from the early part of the last century. It is more elaborately detailed by Richard Shearer, President of the Lansdale Historical Society, but here could be the brief, summary for the marker:

In or around 1910 at Main Street and Railroad Avenue, an unusual culinary event took place involving a butcher prone to seizures, a performing bear and a raucous group of residents.

Now that would make an impression, in addition to piquing one’s curiosity about the event and Lansdale itself!

Another idea for a marker would be to incorporate the H or Hell Tree. According to legend in the book, Weird Pennsylvania, Lansdale was home to one of three H-trees that exist throughout the world (it doesn’t offer information where the other two are). It stood on a 12 foot hill and was an entrance to– of all places– hell. The legend stated that one would have to circle the tree six times and then jump off of the 12 foot cliff at which point the ground would open up and welcome you to hell. Unfortunately, the tree like many other attractions in town, was bulldozed to make room for a housing development or something like that. If the H-tree was found tomorrow, all of Lansdale’s marketing problems would be solved. Think of the potential revenue from a location in Lansdale where people could actually go to hell? Now that’s what I call a transportation hub! But back to reality, an H-tree historical marker in town makes Lansdale interesting.

Somewhere in Lansdale– we’re not exactly sure– was an H-tree which marked the entrance to Hell. To enter one had to circle the tree six times and then jump off a 12 foot cliff at which point the ground would open up and welcome them to their destination. 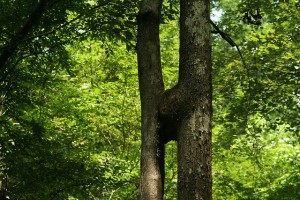 Imagine the photo ops for residents and visitors alike for this one!

My point in all this is to embrace the odd, which makes Lansdale a more personal and memorable place. Put up markers that highlight these oddities. I don’t want to offend anyone, but I probably will when I say that the new Lansdale logo on flags hanging from the lampposts throughout town is generic. Strip malls have them. Let’s do something different.